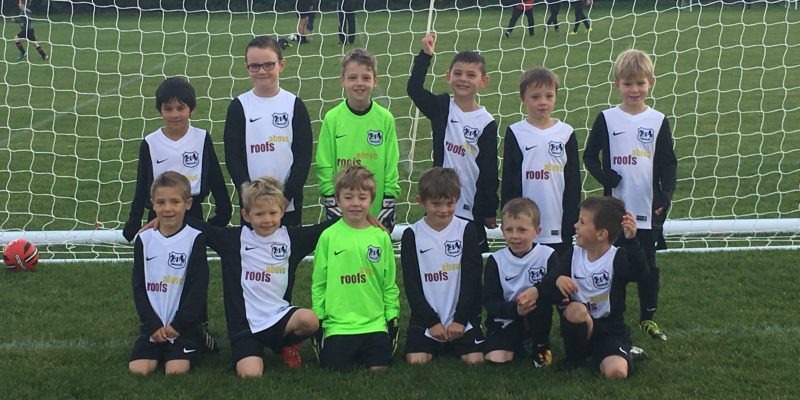 Roofs Above are proud sponsors of there local under 7s Rawcliffe junior football club. 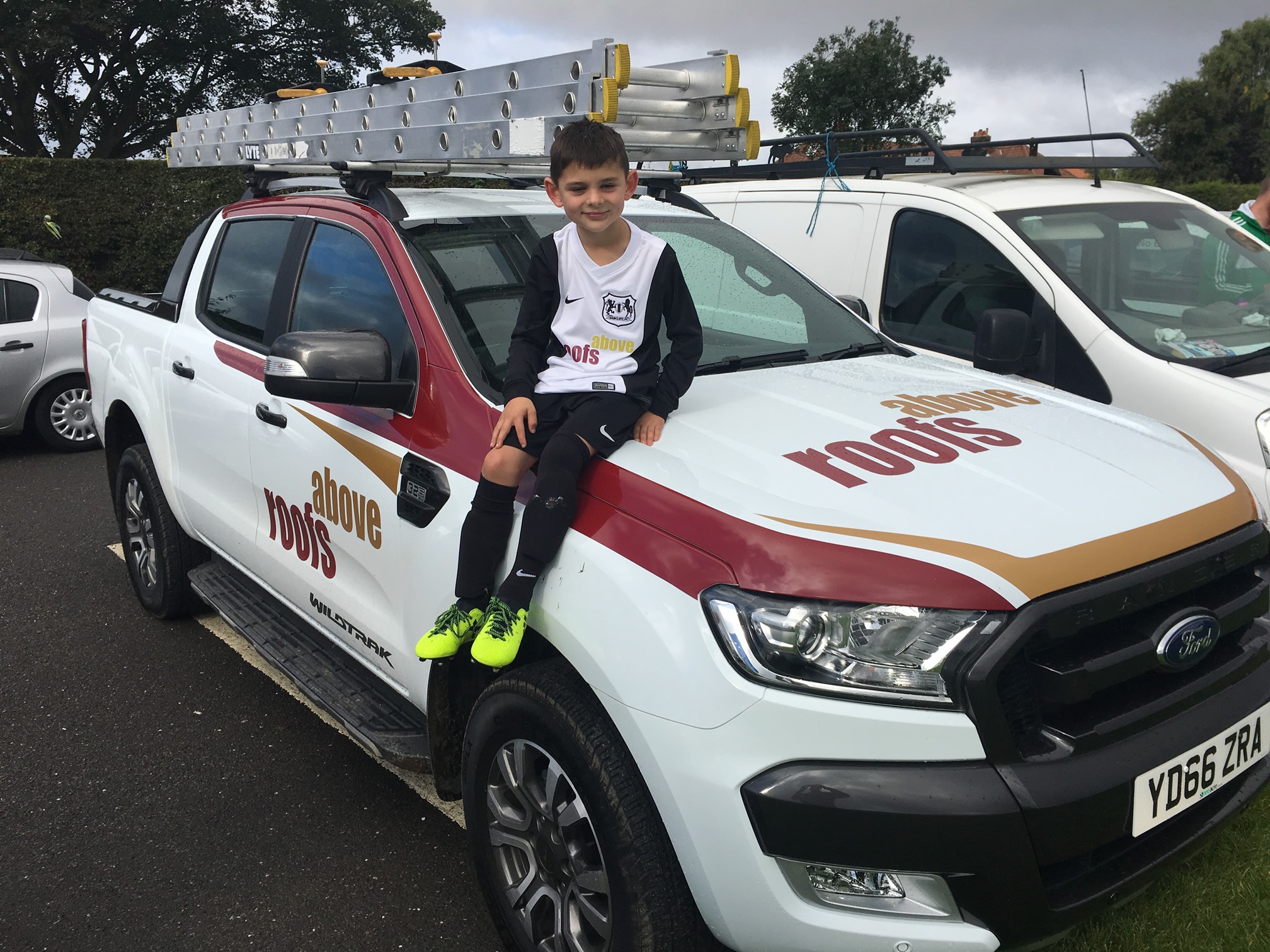 Awesome football from the u7s Blacks team against Wiggington Grasshoppers this morning, as the boys showed their abilities in 2 rainy matches.

There was some fancy footwork from most of the players in both matches, especially Fin Garnett ,Oliver and Harry.

Jack scoring(2) and Noah (1) sealed the deal (3-1) as they scored some cracking goals to win their league match. Harry, Noah and latterly Oliver taking on some powerful shots in the friendly that followed. 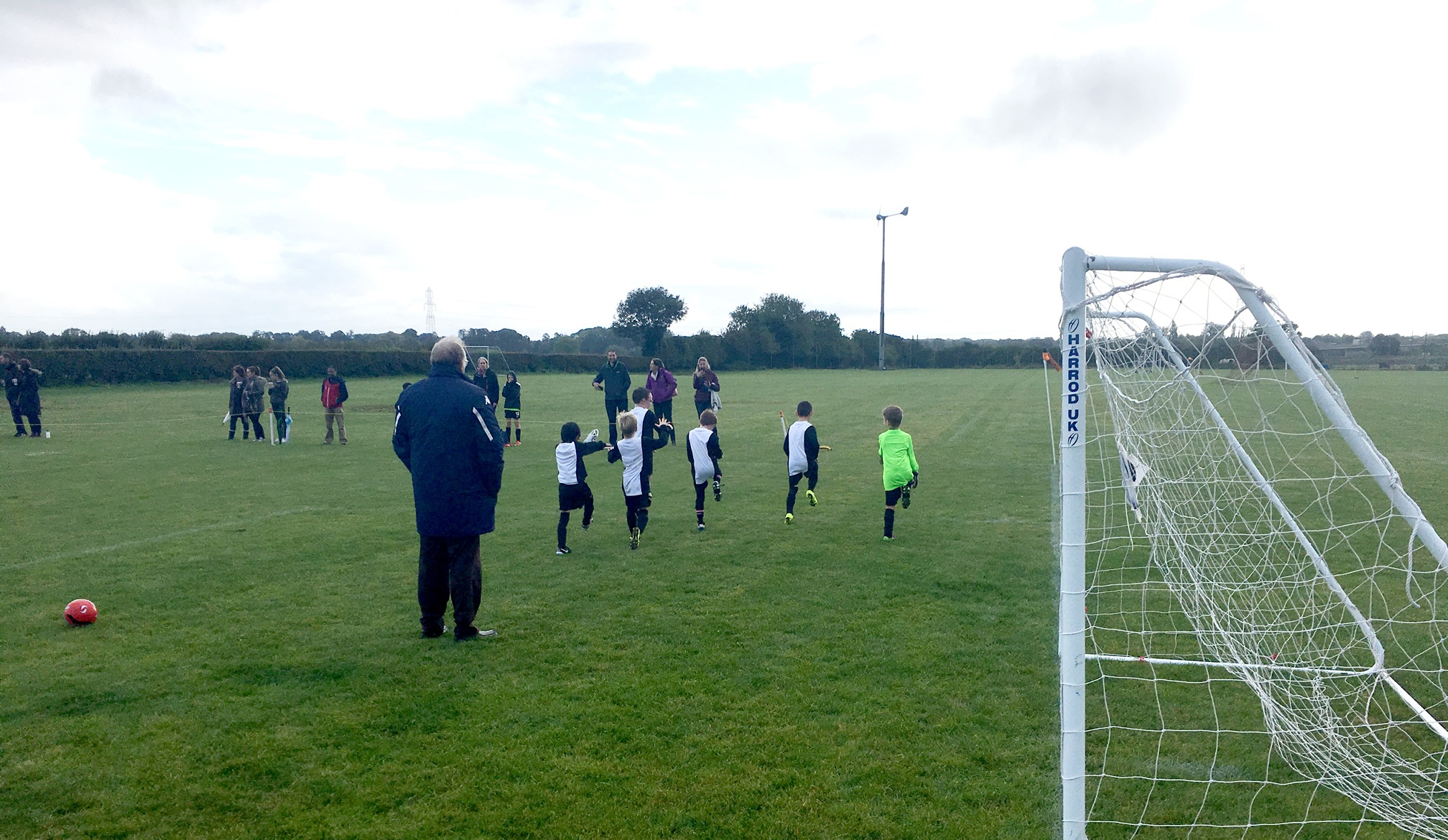 Defending by all the boys was really good as they covered a lot of ground in both matches – particularly by Dexter, Jack and Harry.

Tension was high on the touch line as some stunning crosses came in with the boys attacking furiously in their friendly; the posts sadly taking a battering.
On the defence, Harrison gave a goalkeeping masterclass with all his saves. Despite going down 3-2, the score didn’t reflect how well the boys played or all the chances they created!

The Boys in Black (u7) had definitely had their Readybrek this morning as they were on fire in their match.
Haxby Town gave an impressive display of pre-match training but this didn’t translate onto the pitch, as our boys quickly put them in their place with a masterclass on all fronts. There was passes, crosses, runs, good defence and solid goalkeeping as our boys rocketed to 3-0 in the first couple of minutes.
At the back, Harrison made the job of goalie look easy, letting just the one in the whole match and spotting the other chances early. Dexter and Jack provided a solid midfield enabling Fin, Noah and Oliver to net a hat-trick each by half-time as the score hit 10-1!
The second half didn’t disappoint as Haxby Town tried, in vain, to rescue something from the match. Rawcliffe stood firm and kept the pressure on in attack, resulting in an own goal for Haxby town and both Fin and Noah bagging one more apiece.
Final Score 13-1. Fin(4), Noah(4), Oliver(3), Jack(1) & OG.

The second match (friendly) had more ebbs and flows than the tide in the Humber estuary. Rawcliffe went up 2-0, before tiredness and trying players in other positions dropped them back to 3-2. A second change round allowed the team to equalise the score. A dubious tackle brought up a penalty attempt in the last few minutes with Jack slotting one in to the bottom of the net as they won 4-3.

A good day of football!!

It was a bitterly cold Sunday morning for the U7s Blacks away match against Huntington Harriers and the first-half score ebbed and flowed more than the tide at the Humber estuary.
Huntington chalked up an early goal before a nifty shot from Harry (assisted by Fin and Noah) evened things up. A fine strike from Noah and some deft goalie skills from Harrison calmed the supporter’s nerves as the score became 1-2. Fin and Noah were then swapped out for a rest and on came an eager Dexter and energetic Ollie.
Huntington came back to even at 2-2 before a cheeky long shot from Ollie found the back of the net to bring Rawcliffe the lead again on 2-3. Sadly, a blistering lob balanced the books again 3-3 and the crowd became nervous once more. Harry netted a lovely goal to allow us to catch a breath at halftime 3-4.
In spite of some great goalkeeping by Harrison and Dexter and Jack defending like the Soviets beseiged at Stalingrad, Huntington again evened the score on 4-4. Noah and Fin came back on and added 3 between them to bring the score to 4-7 before Huntington came back again to 5-7. A cheeky Rabona (google it!) from Noah rubbed it in for 5-8 before Huntington came back on the attack to 6-8. Harrison and Jack were like kittens chasing a laser pen, as they kept Huntington at bay for a nervous few minutes, before Jack and Ollie managed to carve up the field and find Noah, who walked in his 5th!
The final score of hid the strong clearance play (and some questionable sportsmanship) from Huntington, with all the boys doing their jobs expertly!
6-9 (Blacks win).

It was a very nervy start from Rawcliffe Blacks, who didn’t seem to be fully awake, as they let through some early runs for York RI and allowed the visitors to go 0-1 up early on. When they started to fire we had some good team passing – notably a great ball from Jack to Harry who then found Oliver’s right foot to even the scores on 1-1, which was how things stayed until half time.
There were some good chances for both teams, with Fin almost on for a couple, but both Harrison and his opposite number had the measure of any attempts and kept the scores steady – if not the nerves amongst the spectators!!
A cheeky shot from Oliver broke the deadlock to allow the home side to edge up to 2-1 before Harrison had to step up and save everything thrown at him for another edgy spell.
The match seemed to be brightening up to mirror the weather as Harry had some great chances before netting one to bring up 3-1. However the boys didn’t seem to be gelling as much as a team and allowed RI to edge back to 3-2. Again it seemed to be settled as Jack passed a good ball to Noah who sent it on to Harry to seal 4-2. The tension mounted again and the ref checked his watch a few times as RI came back to finish on 4-3.
Well done boys!!

Game 2 – friendly
The second game started with challenges aplenty, especially from Dexter up the front. It took Oliver to break the duck and open the taps and bring 1-0, quickly followed by a lovely ball in for Fin to do finish and bring for 2-0. At this point Rawcliffe were camped out in the RI end as Fin scores again for 3-0. Jack decided he wanted in on the action and a lovely long shot into the back of the net sealed the fourth (4-0). RI’s number 7 ran around a few of our boys and managed to get a lucky shot passed Harrison to let them back to 4-1. The boys confidence seemed to perk up a little and there was better passing play from Fin and Harry to allow Noah 3 (7-1) with Jack trying to take out the crossbar on more than one occasion, before a lone run from Fin made it 8-1 and a final from Noah made it 9-1.

2 matches from 2 for the Blacks this morning. Well played boys!!

The Black’s match started well this morning on a less than perfect pitch. Noah cracked in a fine shot 4 mins in against Hamilton Panther’s Blues before things steadied for a while with Jack having a sterling game in mid/defence. Both Harry and Ollie some good chances upfront, but it was Noah’s boot which sent the ball to the back of the net from 10 yards out, late in the first half.
Dexter came on and things settled again into the second half before Fin sent one in and the game seemed certain on 3-0. Play got a little scrappy then with Hamilton on the attack. In spite of some fine saves by Harrison in goal, Hamilton came back to 3-3.
Ollie brought up 4-3 and the nerves in the crowd began to rise as it looked like the boys had the match. Sadly, a lucky shot on the final whistle and the game ended in a draw 4-4.

There were goals aplenty in the second game with Ollie nailing 2 within the first 4 minutes. A fine cross from Dexter let Harry in to bring 3-0 within 7 minutes. A second from Harry and a third from Ollie saw the boys on 5-0 at half time.
Noah and his boots had a good chance from the whistle from a brilliant cross from Harry, but sadly it went wide.
Harrison’s skills were called on after he’d cut a lonely figure in the first half with some good saves. A Lovely finish from Dexter and it was 6-0 before Noah made it 7-0. Hamilton Panthers came back to 7-1. Noah sealed the deal with 2 more to make it 9-1 at the whistle.

A THRILLING TROPHY match at the Audi pitches saw the U7 Blacks come from 2-0 down to win 3-2 against Wilberfoss.

A brace from Noah levelled the scores before half-time, at which point the match could have gone either way.

Two reaction saves from Harrison kept the Blacks in the game before Noah secured the game, his hat-trick and the points.

Special credit to Jack and Fin for some fine defending, setting up many of Rawcliffe’s attacks.

In the subsequent friendly the Blacks made their now-customary slow start and went behind again before getting into their stride.

Both teams made extensive team and positional changes for the game. Rawcliffe ran out comfortable (9-3) winners as Wilberfoss brought some of their squad players in for a game and the Blacks tried people out in different positions.

Dexter thrived on a move up front, scoring 4, while Harry got 3 and Noah 2.

Great performances everywhere on the pitch and unbelievable effort from every player. Well done to them all
👏🏼👏🏼👏🏼 🔥⚽️🔥👍🏻